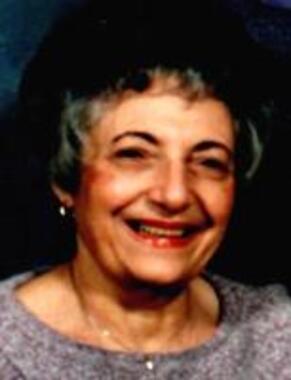 Back to Adele's story

Methuen, MA - Adele M. Saab, 98, passed away at Holy Family Hospital. Born in Lawrence, Mass., over 98 years ago, Adele lived a long and complete life. She went from earth to her real home on February 9. A graduate of Lawrence High School, employed many years ago at Brockleman's as a head baker and cake decorator, Adele went on to marry Tom Saab, former Lawrence police officer, who predeceased her in 1981 at the age of 61. She was also predeceased by her parents, Kaiser and Anne Saad; her sister Mary Samia; and her two grandchildren, Jared and Jeffrey Saab.

Adele had a great sense of humor. She made everyone laugh with her unique comments and conversations. Actually, she was hilarious at times without even knowing it. We will all miss that unique ability to make everyone smile. An excellent cook, Adele was a perfectionist when preparing Arabic food as well as her special pastries. She taught many people, including her granddaughters, how to cook Lebanese dishes.

Her family and friends knew what a great card player she was, hosting her Friday night poker games and always playing 45s with her family on holidays. Many times, she won those card games. She did not like to lose.

Adele was a game show aficionado and loved to watch many of her shows every day. We all knew her favorite, The Price is Right. Surprised by her family one Christmas, her special gift was a trip to California to be in the live audience of The Price is Right. Soon after, Bob Barker sent her an autographed picture of himself. Of course, then there is Adele the die-hard Red Sox fan. From April through October it was seldom she didn't have a Red Sox game on the TV. If it was a late-night game, she would have the replay on the next morning.

Sitto loved her grandchildren and they loved her. She played a major role in their life growing up. She had a special bond with each of them, Brittany, Jaslyn, Ashley, Amanda, Tommy III and Don Jr. She also leaves behind two great-grandchildren, Arthur, and also two-month-old August who she met for the first time the day before she left us.

The family is extremely thankful for the great ladies from Associated Homecare who watched over Adele and attended to all of her needs these past four years. All of these wonderful women, too many to mention each by name, were a blessing to Adele. Special appreciation to her granddaughters, Jaslyn, who was sort of her life supporter these past years, and Brittany, who constantly dropped in to bring a smile to her face. Also special thanks to Judy Preston, who helped with her physical therapy and provided other emotional support these last few years.

Besides her grandchildren, Adele leaves behind her three sons and their wives: Thomas and his wife Sally of Salem, N.H., and Salisbury Beach; Donald and his wife Fran of Salem, N.H.; Edward and his wife Pam of Windham, N.H. In addition, she also leaves her sister Nancy Moore and her husband Ramon, and Sophie and her husband Richard. Adele also had numerous nephews, nieces and cousins who will all miss her, in addition to the many friends that she made over the years.

Calling hours will be on Thursday, February 13, from 4 to 8 p.m., at Farrah Funeral Home, 133 Lawrence Street, Lawrence, MA. Funeral services will be held at Saint Anthony's Church at 10:30 a.m., Friday, February 14, with burial following at Saint Anthony Cemetery. In lieu of flowers, you may donate to Elder Services of the Merrimack Valley in Lawrence or the Methuen branch of the MSCPA at Nevins Farm. For directions or to offer condolences, go to farrahfunerals.com.
Published on February 12, 2020
To send flowers to the family of Adele M. Saab, please visit Tribute Store.

Send flowers
in memory of Adele

My sincere condolences to all of her family.
May she Rest In Peace.

Karen Murphy Brown
Tom, Donald and Eddie, I have wonderful memories of your Mom watching over me when we lived upstairs on Forest st. She always brought me soup when I stayed home from school sick. Visited her many times over the years, losing a parent is never easy. my sympathies to you all.
Diane Forzese
Always kind and a beautiful smile on your face. You were dearly loved by all of your family ❤️🌈
Melissa Farrah Bouzianis
To the Saab Families,
“Auntie Adele” held a special place in my heart. I loved her sense of humor, her wit and the way she made everyone smile. Family was the most important thing to her. She always spoke with love for her three sons and all they did for her. She was a fixture in my childhood and great friends with my parents, Jeanne and Al Farrah. I was honored to call her Auntie.
With love,
Melissa “Missy” Farrah Bouzianis
Rick and Stacey Dodge
To the whole Saab Family,
We wish we could be there with you all during this time.
Adele was such a special loving person and will be missed.
Our memories are wonderful with both your folks and they will be forever cherished.
Sam & Barbara Gould
Our thoughts and prayers are with her family and friends.
Jack & Grace Enos

Adele, now that you have gone home to be with Lord, may you find peace and rest.

Cindy Donovan Whittaker
My dearest Auntie Adele, my loving Godmother. I will always remember your beautiful smile. My condolences to Tom, Eddie, Donald and their families. Love, Cindy
Debbie & Kevin Buckley
We are so sorry for your Loss.
You All have many treasured memories that will live in your hearts forever.
Praying for you all during this difficult time.
Katy Abraham
Over the years I had the pleasure of visiting with Adele and I always parted feeling I had received a wonderful gift. She was a treasure and will be truly missed.❤️
Marilyn Bruno
She was a great person and will be missed. She had a special place in my heart.
View all