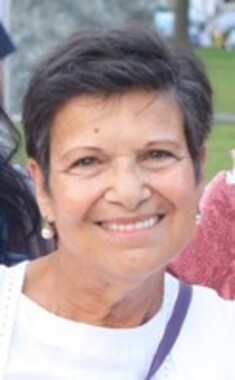 Back to Agnes's story

Lawrence - Agnes (Sapienza) Bain, 70, passed away on December 21, 2019 surrounded by her family at the Lahey Clinic in Burlington, MA of complications from an emergency surgical procedure.
Agnes was born in Lawrence, MA to Mary (Scuderi) and Sam Sapienza on November 26, 1949 after her mother claimed she had a large Thanksgiving dinner. She grew up in a household full of grandparents on Orchard St. until the family eventually moved to East Haverhill St. She was bilingual, speaking both Sicilian and English without missing a beat. Part of a vibrant Italian community in Lawrence, she grew up with her treasured baby sister Gina and many dear cousins and friends in the neighborhood and enjoyed reconnecting with everyone each year at the Feast of Saint Alfio.
Agnes was educated at Holy Rosary School in Lawrence and Presentation of Mary Academy in Methuen (Class of 1967). An excellent student, she went on to receive her bachelor's degree in History and Political Science at McGill University in Montreal, Canada in 1971.
In September of 1970, Agnes married David John Bain Jr. The two moved to Montreal so Agnes could finish her undergrad education and then to Cambridge, MA where they each started their graduate degree programs. Agnes received her Ph.D. in Political Science from Boston University in 1978.
Now Dr. Bain, Agnes began a long career teaching at Suffolk University in Boston, MA. She chaired the Government Department for 19 years and helped found the College of Arts and Sciences Honors Program, which she chaired for ten years. She joined Suffolk University in 1974 and retired in 2017 as professor emeritus.
Her area of research centered on community advocacy. Most recently, she co-authored a book, "Partnering with Parents to Ask the Right Questions" with Luz Santana and Dan Rothstein. The book was the culmination of her work with an organization called "The Right Question Institute" which has sought to develop a framework for increasing participation of low-income people in democracy.
As accomplished a career as Agnes had, her lasting impact is her family. She and her husband had their first date in 1968 at a drive-in showing of "The Graduate," endured the separation of the Vietnam War, and were married 40 days after David's return. David and Agnes have been best friends and partners in crime ever since. They carved out their life together from that moment and had three beautiful daughters Elizabeth, Rachel, and Deborah who will forever remember the legacy of their mother as one of strength, compassion, humor, and grace under pressure. She was their collective best friend.
In 2004, Agnes received a life-saving liver transplant that gave her 15 additional years with her family and friends. She lived each day as the gift that it was, seeing her family through major milestones and most importantly, the births of her three grandchildren.
Agnes, in the end, loved her role as Nanna more than anything and developed a special relationship with each of her grandchildren.
She is survived by her husband of 49 years, David J. Bain Jr., of Lawrence; her three daughters, Elizabeth Bain of Haverhill, MA; Rachel Bain and her husband Marcus Soule of Byfield, MA; Deborah Bain and her husband Grant Marshall of Rowley; her three grandchildren, Katherine Robey, Benjamin Soule, and Nathaniel Soule. She also leaves her sister and brother-in-law, Gina and Jay Kahn of Wilbraham, and her sister-in-law, Ann Bain of Baltimore, MD as well as her cherished nephews and niece, cousins, friends, and colleagues.
The family would like to thank Agnes' medical team at the Lahey Clinic in Burlington for 15 years of compassionate and excellent medical care. In particular, Dr. W. David Lewis, Dr. Edward Walshe, and Dr. Caroline Simon - each of whom, in addition to providing superb medical care, became a friend to Agnes over the years.
In lieu of flowers please consider making a donation to New England Donor Services (NEDS) at New England Donor Services, 60 First Avenue, Waltham, MA 02451 or online at https://neds.org/give/.
Relatives and friends are respectfully invited to attend visiting hours on Friday, December 27, 2019 from 4 to 8 p.m. and Saturday, December 28, 2019 from 10 to 11 a.m. at Cataudella Funeral Home, 126 Pleasant Valley St., Methuen. Her funeral service will be held at 11 a.m. on Saturday, December 28, 2019 in the funeral home chapel. Burial will be in Immaculate Conception Cemetery, Lawrence. For directions or to send condolences, please visit www.cataudellafh.com.
Published on December 26, 2019
To plant a tree in memory of Agnes (Sapienza) Bain, please visit Tribute Store.

Plant a tree in memory
of Agnes

A place to share condolences and memories.
The guestbook expires on March 24, 2020.

This afternoon I was Googling former teachers who made a difference in my life, and Professor Bain holds a special place for me. She transformed me from a struggling student into a real academic that loved learning (and this still holds true today). Reading about her life was remarkable - I had no idea about her background and family, and can see why she was always so pleasant to be around.

Sending thoughts and prayers to her family.
Jayne Bingham
Dear Agnes How I will miss our political and other discussions. We became kindred spirits and just had to cross the road for a cup of tea and a book exchange. You loved coming to the Island and we were so happy to see you. Dick and I are so sad for all of you.
Wilson

Sending the Bain family heartfelt condolences on the passing of dear Agnes.

Bible scripture:
Psalm chapter 34 verse 18
The Lord is close to the brokenhearted and saves those who are crushed in spirit.

Joseph & Cheryl Leone
We are extremely sorry and shocked on the passing of our cousin Agnes. She was a lovely and sensitive person and will be very missed by our family.
We are sorry we can't attend Agnes' services, but we just arrived in Florida after spending Christmas at Chris' with our grandkids.
With love.
Philip J. Byers and Linda Byers
Agnes was David's best friend, confidant, adviser, love of his life, his better self. We met in 1974 when David and I attended Suffolk Law School. It was through law school where I met David and our third compatriot Lewis Baer. The three of us were inseparably linked, sitting in the library, studying torts or whatever. Laughing and sermonizing in the cafeteria over black coffee, David clad in his Vietnam era army jacket. Soon spouses were introduced to our friendship, adding colors and flavors that we three could not possibly contribute as we shared weekend events, holiday celebrations which evolved into a deep and abiding friendship. Agnes became as much my friend, colleague, con...fidant as David was.
My reaction to learning of Agnes' death is shock, now heartache.
David, my dear friend, I am so sorry. Many share the grief of her loss. She was special. You, Elizabeth, Rachel and Debbie are all blessed for having Agnes as wife, mother, and now of course, nana.
Significantly as well, we her friends are blessed.
There are so many things that will remain silence now. I will miss her exceptionally funny stories and sharp observations particularly during political campaigns.
I will miss her warmth and smile as she recounts memories of the girls, of David. of Sam and Mary.
I will miss her presence with David as they presided in their home, sitting at the dining room table, engaged deeply in discussions.
Most of all, I will miss her friendship.

May G-d protect her and keep her.
May He cause His countenance to shine upon her
And grant her peace.

For as long as we all live, Agnes too shall live.
Love always,
Linda and Philip ByersRead more
Ray and Carey Sapienza

Heavenly and Harmony was purchased for the family of Agnes (Sapienza) Bain by Ray and Carey Sapienza.  Send flowers

Larry Coleman
My sincere condolences to Mr Bain and his wonderful family. May Agnes rest in peace 🙏❤🙏
View all