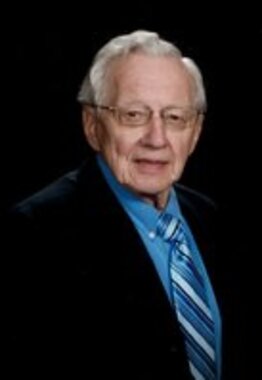 Back to Albert's story

Groveland - Albert V. Seavey, 91, passed away February 7, 2020, at Penacook Place. He was the loving husband of Shirley M. (Demers) Seavey, and would have celebrated their 70th wedding anniversary on February 19.
Born in Haverhill on August 10, 1928, he was the son of the late Sheldon A. and Rose M. (Boulay) Seavey; and step-father, George Haskins.
Al was educated in Haverhill and graduated from Haverhill Trade School, class of 1946, where he was president of his class. He served honorably as a member of the U.S. Army during the Korean War with the 559th Ord Int Rep De until his discharge as Corporal in 1954. Al worked many years as a well-respected electrical contractor in the greater Haverhill area. Following his retirement, he served as Wiring Inspector for the Town of Groveland for 15 years.
For 65 years, Al was a faithful member of First Baptist Church in Haverhill. His deep and abiding faith influenced and directed his professional and personal life, and guided his family life. He served his church as a Sunday School Teacher and Deacon for many years. Al was recognized for his extraordinary service being honored as the only Elder Emeritus. He was a member of the Charles C. Dame Lodge A.F. & A.M. in Georgetown. Al was a Master Fly Fisherman who enthusiastically traveled throughout the country using his hand tied flies. He enjoyed sharing fishing stories, and being a mentor to many young fishermen.
Besides his wife Shirley, Al is survived by his children, William V. Seavey and wife Kelly of Wolfeboro, N.H., Catherine Clark and husband Arthur of Plaistow, N.H., Paul A. Seavey and wife Linda of Nottingham, N.H.; grandchildren, Jennifer, Daniel, Alex, Kristina; two great-grandchildren; sisters, Barbara Rivers of Tenn., Lillian Sexton of Calif.; brother, George Haskins and wife Linda of Fla.

Relatives and friends are invited to attend a memorial service on Saturday, February 15, at 12 p.m., at First Baptist Church, Haverhill. Donations in Al's memory may be made to the Trustees of First Baptist Church, 217 Main St., Haverhill, MA 01830. Arrangements under the direction of Dole, Childs & Shaw Funeral Home, 148 Main St., Haverhill. Online condolence may be sent to www.dcsfuneralhome.com.
Published on February 12, 2020
To send flowers to the family of Albert V. Seavey, please visit Tribute Store.

Send flowers
in memory of Albert

Sally & Russ Lowther
So sorry to head of Uncle Alberts passing. I remember him being a kind and generous uncle. God bless his family
Colden & Seymour ENT

Mike and Bobbi Gaudette
So many memories of Al at the island that he loved so much. What a wonderful man whom we will miss so much. He was a one of a kind. Keep fishing Al. We will miss you.
Jaynie MacMullen Dameron

Love and prayers for your family at this difficult time.

Wanda Estes
A very nice man with a kind heart and a gentle soul. My condolences to Mrs. Seavey and the whole Seavey family. Special hugs for Cathy, Jen, Dan and Arthur
Jenna Ray Williams
Deepest sympathy to Shirley and the family. Thankful for many years of friendship with Al at First Baptist. I remember laughter and friendly conversations. Prayers during this time of loss. May God bless.
Nancy and Alan Montello and Family
Dear Shirley and Family
Nancy and I are deeply saddened to hear that Al has passed.
Al was a dear friend and role model to me and our family on many levels for many decades.
I have so many wonderful memories of sharing fishing and family experiences with Al.
I will miss Al .
Love, The Montellos.
Ray & Donita DeZenzo
Our thought and prayers are with you Shirley and family.
Sandy McCready
Al was such a special person in my life. He was such an encouragement to me in so many ways. He was our leader for our Tuesday night small groups. We learned so much from him in the time that he shared God’s Word with us. We were sad when he stopped teaching but we knew it was best for him. He had such a spirit of love and caring no matter who you were. I will truly miss him but I know we will be together eternally one day in God’s Kingdom. Love you Al.
Andrea
I remember this man from First Baptist Church in Haverhill, MA. He was very kind.
View all