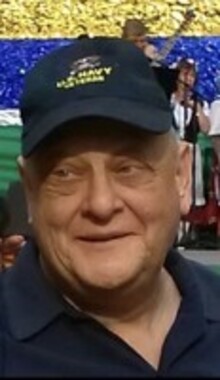 Back to Anthony's story

Methuen - One of Elvis Presley's greatest fans, Anthony A. Petteruti, 69, longtime resident of Methuen passed away peacefully on December 2, 2019 at the High Pointe House in Haverhill surrounded by his loving family. Born in Lawrence on September 26, 1950 to the late Americo and Josephine (Garafalo) Petteruti, he graduated from the Greater Lawrence Regional Vocational Technical School, Class of 1969. Like so many of his generation, Anthony served with honor in the United States Navy during the Vietnam War. After his discharge from the service he returned to the Merrimack Valley.
Anthony was a very selfless man who was proud to serve others, he was a member of the American Legion, Veterans of Foreign Wars, the Lawrence Elks, and Yankee Security. He loved many of the simple pleasures in life, but had a lifelong fascination with the many subjects of outer space. Never a stranger to hard work, Anthony worked as a supervisor at Raytheon until his retirement. Additionally, in his youth he was an usher at Showcase Cinemas and was an entrepreneur, owing his own locksmith company. Anthony touched many lives in many different circles and will fondly be loved, cherished and missed by all.
Anthony is survived by his wife, Linda (Thorpe) Petteruti of Salem, NH, and his three daughters; Anita Petteruti of Methuen, Tina Indieka and her husband Charles of Worcester, and Holly Petteruti-Johnson of Londonderry, NH. He was also the proud grandfather to his four grandchildren; Vincenzo, Jasmyn, Jeremy, and Angelica. Anthony is also survived by his two sisters; Annmarie Morse of Pelham, NH and Joyce Faro and her husband Sebastian of Seabrook, NH and many nieces and nephews.
Visitation for Anthony will be held on Friday, December 13, 2019 from 9-11 AM at the Kenneth H. Pollard Funeral Home, 233 Lawrence Street, Methuen. Friends and family are cordially invited to attend. A funeral service will be held at 11 AM at the conclusion of calling hours at the funeral home. Interment to follow at Bellevue Cemetery, 170 May Street, Lawrence. In lieu of flowers, please consider a donation in Anthony's memory to either the American Legion Post 63, 38 Millville St. Salem, NH 03079 or to the National League of POW/MIA Families, 5673 Columbia Pike, Suite 100, Falls Church, VA 22041. The Kenneth H. Pollard Funeral Home is proud to serve the Petteruti family.
Published on December 11, 2019
To plant a tree in memory of Anthony A. Petteruti, please visit Tribute Store.

Plant a tree in memory
of Anthony

A place to share condolences and memories.
The guestbook expires on March 09, 2020.

My sympathy to Joyce and Sebastian ""Busty"" and Debbie and the family God Bless all.