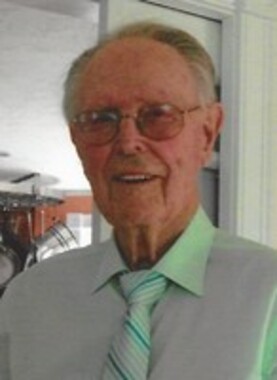 Back to Arthur's story

Salem, NH - Arthur W. Smith, 96, of Salem, NH passed away on Wednesday, November 20, 2019 at his home in Salem surrounded by his loving family.
He was born in Malden, MA a son of the late Guy and Bernice (Baker) Smith.
Mr. Smith proudly served his country as a member of the U.S. Army Signal Service Battalion during WWII, being stationed in India and Europe. He also proudly built four homes in Salem. He owned and operated Rockingham Oil, an oil company in Salem and later worked for the McDuffie Oil Company in Hudson, NH, managing the oil side of the business, retiring in 1987. Mr. Smith served three terms as a State Representative from Salem, from 1996 to 2002 and then served on the Budget Committee in Salem from 2003 to 2006. He was a member of the Legislators for Limited Spending. Mr. Smith always tried to do the right thing and always wanted to look out for the "little guy" to make sure that they had a voice in politics. He was an unassuming hero who never asked for anything yet gave everything of himself. He loved animals so much so that he helped his son open a veterinarian hospital in Maine. He was also an avid fan of the Boston Red Sox.
He is survived by his soul mate and wife of 37 ½ years; Donna (Roy) Smith of Salem, his son; Peter Smith and his wife Louise of Yarmouth, Maine, his three step-daughters, Colleen Moran and her husband, Mark of Salem, Darlene Carroll and her husband, Matthew of Kingston, NH and Sherry Abruzese and her husband Michael of Windham, NH. He is also survived by his grandchildren; Zachary Smith and his wife Meredith, Georgia Smith, Jake, Sydney, Erin, Carly, Conor, Shannon and Isabella and by several nieces and nephews. He was predeceased by his first wife; Rita Smith in 1980, by his twin sisters; Elizabeth Hill and Louise Dunham and his sisters; Bette Egnet and Adelaide Callahan.
Visiting hours will be held on Monday, November 25, 2019 from 4 to 7:30 p.m. in the Douglas & Johnson Funeral Home, 214 Main St., Salem. Remembrances will be shared starting at 7:30 p.m. Monday in the funeral home. Following cremation, graveside services with military honors will be held at 12:30pm Wednesday in the Laurel Hill Cemetery, 16 Lowell St., Reading, Mass. The family would like to thank The Compassionate Care Hospice for their kind care given and shown to Arthur and his family. In lieu of flowers memorials may be directed to the Salvation Army, 250 Haverhill St., Lawrence, MA 01842. This was Arthur's favorite charity due to his experience while serving in England during WWII, the Salvation Army made sure that he and his fellow soldiers were fed. To send a message of condolence to the family, please view the obituary at www.douglasandjohnson.com.
Published on November 23, 2019
To plant a tree in memory of Arthur W. Smith, please visit Tribute Store.

Plant a tree in memory
of Arthur

A place to share condolences and memories.
The guestbook expires on February 20, 2020.

Restore this Guestbook to share a memory or message of condolence of your own.