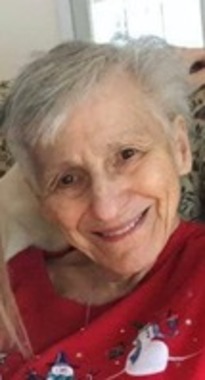 Back to Eleanor's story

Plaistow, NH - Eleanor T. (Bertolaccini) Hutchins, 90, of Plaistow, passed away peacefully on Tuesday, February 11, 2020, at Hannah Duston Healthcare Center.
Born in San Romano, Italy, she was the daughter of the late Geno and Lena (Moscardini) Bertolaccini. Having immigrated to America she was raised in Somerville, MA, and was a graduate of St. Clement High School, Class of 1947.
Eleanor married Arland F. Hutchins in July 1949. A loving wife and mother, she devoted her life to raising their eight children. Eleanor treasured being a mother and cherished her grandchildren and great grandchildren.
She will be sadly missed and lovingly remembered by her sons, Alan Hutchins and his girlfriend Barbara Gebaurer of Fremont, NH, Richard Hutchins and his girlfriend Nancy Piper of South Paris, ME, Steven Hutchins of Hampstead, NH, Mark Hutchins of Milford, NH, Larry Hutchins and his wife Maureen of Milford, MA, Brian Hutchins and his wife Ruth of Rutland, MA, daughters, Linda Larson of Plaistow, NH, and Laura Greene of Haverhill, MA, sisters, Vera Lotti Buckley of Somerville, MA, Jeannette Alibrandi of Waltham, MA, fourteen grandchildren, five great grandchildren, several nephews and nieces. She was predeceased by her husband of forty-four years Arland F. Hutchins.

A Memorial Service will be held for Eleanor on Saturday February 15, 2020, at 2 p.m. in the Rock Church, 90 Newton Rd, Plaistow, NH. In lieu of flowers, donations in her memory may be made to Samaritan's Purse (General Fund), P.O. Box 3000, Boone, NC 28607, (828)262-1980. Arrangements in care of Brookside Chapel & Funeral Home, 116 Main St., Plaistow, NH. To send a message of condolence please visit www.brooksidechapelfh.com.
Published on February 13, 2020
To send flowers to the family of Eleanor T. (Bertolaccini) Hutchins, please visit Tribute Store.

Send flowers
in memory of Eleanor

A place to share condolences and memories.
The guestbook expires on May 12, 2020.

My deepest condolences on the loss of your mom. She and you all will be in my thoughts and prayers.

Tender Tribute was purchased for the family of Eleanor T. (Bertolaccini) Hutchins by Al and Barb.  Send flowers