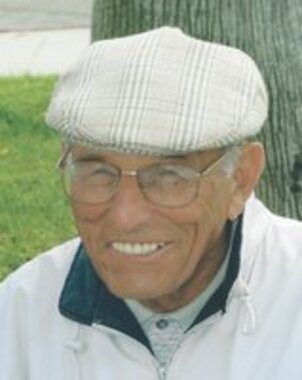 Back to George's story

Salem, NH - George W. Ney, 94, of Salem, NH died peacefully Saturday, January 11th at High Pointe Hospice House, surrounded by his family. George was born in Appleton, WI the oldest of five children of Daisy and Leonard.
Shortly after high school graduation he joined the Navy. After training at the Great Lakes and Hawaii, he was a quartermaster on a landing craft at the invasion of Iwo Jima. George was always justifiably proud of this service. While at Iwo Jima, he had shrapnel injuries for which he received the Purple Heart medal. After the war, George received his degree in mechanical engineering from the University of Wisconsin. He worked at the Brillion Iron Works in Wisconsin, later working at Sunstrand Aviation in Rockford, IL, then he had a twenty-plus career at 3M in Minnesota. In retirement, he and Mary wintered in the Los Angeles area to be near grandchildren.
George was a twenty-year resident of Salem, NH. He and his wife Mary raised their family in the White Bear Lake are of Minnesota. They were both active at First Congregational Church in Salem and greatly enjoyed the fellowship there. George's real love was fishing, sailing and paddle boating on Millville Lake in Salem in the summer. A visit to Sammy J's for breakfast with friends from church every Thursday was always the highlight of his week. Every summer his grandchildren enjoyed visiting him and riding in the two model T's he restored after retiring. George was predeceased by his wife, Mary (Sorensen) Ney, his son, Glen Ney and his brother, James Ney.
George is survived by his children, Carolyn Grasso and her husband Jay and Bryan and his wife Lisa; his sisters, Pat Deberard, Rosemary Green and Mildred Fose and her husband John; his 5 grandchildren and many nieces and nephews.

The funeral service will be on Thursday, January 16th at 11:00 AM at First Congregational Church, 15 Lawrence Rd. Salem, NH. The arrangements are under the care of Douglas & Johnson Funeral Home, 214 Main St., Salem, NH.
In lieu of flowers, donations in George's name may be made to: First Congregational Church, 15 Lawrence Rd. Salem, NH.
To send a message of condolence to the family, please view the obituary at www.douglasandjohnson.com
Published on January 15, 2020
To plant a tree in memory of George W. Ney, please visit Tribute Store.

Plant a tree in memory
of George