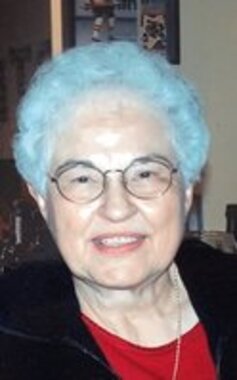 Back to Lorraine's story

Atkinson, NH - Lorraine R. (Proulx) Cote, 86, of Atkinson, died December 8, 2019 at her home surrounded by family and friends after a valiant battle with pancreatic cancer.
She was born at Notre Dame Hospital in Manchester on February 28, 1933 to Louis and Eva (Veilleux) Proulx. She resided in Concord during her youth until 1944 when her father died. She then moved to Manchester and attended St. Vincent -de-Paul boarding school. She then attended St. Joseph High School in Manchester where she graduated in 1951. After graduation, she did clerical work at the NH Fire Insurance Company in Manchester.
In 1953 she married Armand Cote, her high school sweetheart and relocated to New Jersey while he was stationed at Fort Monmouth. Following his tour of duty they moved to Lawrence, MA where they resided for 30 years during which time she brought up her children. While residing in Lawrence, Lorraine had worked for the Internal Revenue Service on a seasonal part-time basis. Then she and Armand moved to New Hampshire where she resided until her death.
She enjoyed the role of a loving mother, guiding her children to be responsible adults. She particularly enjoyed her grandchildren and took the opportunity to attend many of their school athletic events, especially those nearby her home. She enjoyed family gatherings and playing cards with friends and family. Also, she occasionally enjoyed sewing projects.
Family members include her husband of 66 years, Armand Cote of Atkinson; five children, Linda Cote and husband, Edward Sheridan of Belfast, ME, Susan DiVincentis of Plaistow, Richard Cote of Plantation, FL, Judith Desharnais and husband Leonard of Franklin, Steven Cote and wife, Laurine of Salem; eight grandchildren, Robert DiVincentis and wife Sarah, Jeffrey DiVincentis, Aislinn Cox and husband Ty, Lindsay Benton and husband Robert, Kelly Catale and husband Joseph, Ryan Desharnais, Amanda Cote and Zackery Cote; three great-grandchildren, Nathan, Nicholas and Julia; a sister, Germaine Comeau of Groveland, MA. She was predeceased by a son, Robert Cote in 2018.

Calling hours are Wednesday, December 11th from 10 to noon at Lambert Funeral Home & Crematory, 1799 Elm St, corner of North St, Manchester. A Mass of Christian burial will follow on Wednesday at 1:30 pm in St. Anne Church, 26 Emerson Ave., Hampstead. Interment will be in Mt. Calvary Cemetery at a later date.
In lieu of flowers, donations may be made in her memory to Merrimack Valley Hospice, 360 Merrimack St, Lawrence, MA 01843.
To leave an online message of condolence, please go to www.lambertfuneralhome.com.
Published on December 10, 2019
To plant a tree in memory of Lorraine R. Cote, please visit Tribute Store.

Plant a tree in memory
of Lorraine