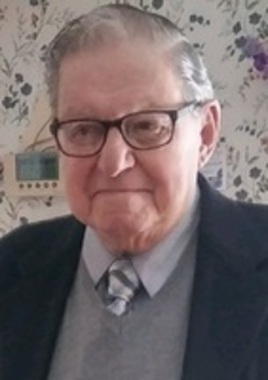 Back to Paul's story

Haverhill - Paul R. Moll, 90, a native and lifelong resident of Haverhill, died peacefully on Tuesday evening, December 3, 2019, with his family by his side, at High Pointe Hospice House.
Son of the late Ralph L. and Leonora (Bouvier) Moll, he attended Saint Joseph Grammar School and graduated from the former Haverhill Trade School. A veteran of the Korean Conflict, Mr. Moll served in the U.S. Air Force from 1947 until 1951. He was honorably discharged as a Sergeant and was a recipient of the Korean Service Medal, the Japan Occupation Medal, and Good Conduct Medal.
Mr. Moll was employed for all of his working career as a sheet metal mechanic and was a member of the Sheet Metal Workers Union Local 17 of Boston.
He was a longtime active member of All Saints Parish and the former Saint Joseph Parish of Haverhill. He served on several parish committees including the Parish Activities Committee and was the organizer of the annual parish turkey raffle for several years. When his children were younger he served as a coach for the Saint Joseph Little League and as a Scout Master for Troop 27 of the Boy Scouts of America. He was also a founding member and supporter of the Bradford Athletic Club.
A devoted husband, father, grandfather and great-grandfather, Mr. Moll enjoyed ice fishing on Great Bay, hunting, vegetable gardening, wood working and rooting for his Boston sports teams. He most enjoyed spending holidays, special occasions and vacations with his family and hosting family and friends for parties and cookouts around his back yard pool.
He will be sadly missed and lovingly remembered by his devoted wife of sixty-seven years, M. Claire (Morin) Moll, two sons, James L. Moll and his wife Connie, of Bradford, and Lawrence J. Moll and his wife Laurie, of Haverhill, three daughters, Elizabeth A. Henderson and her husband, William, of Haverhill, M. Christine Dillon and her spouse, Nancy Ellswick, of Easley, S.C., and Angela M. Moll, of Worcester, a sister, Pauline Dupuis, of Seabrook, NH, sixteen grandchildren, twenty-five great-grandchildren, and several nieces and nephews. He was predeceased by brothers, Richard, Wallace and Clement Moll, and a sister, Jeannette Kapela.
Relatives and friends are invited to call on Monday, December 9, 2019 from 4 to 8 p.m. at Brookside Chapel & Funeral Home, 116 Main St., Plaistow, NH. His funeral liturgy will take place on Tuesday, December 10, 2019 at 10 a.m. in the funeral home, followed by burial with military honors in Saint Joseph Cemetery, Haverhill. To send a message of condolence to the family, please visit www.brooksidechapelfh.com.
Published on December 6, 2019
To plant a tree in memory of Paul R. Moll, please visit Tribute Store.

Plant a tree in memory
of Paul

A place to share condolences and memories.
The guestbook expires on March 04, 2020.