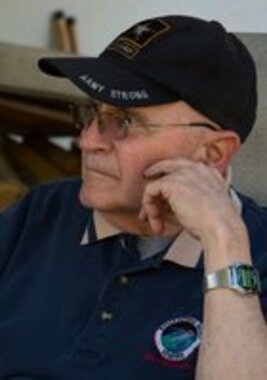 Back to Richard's story

Amesbury, MA - Richard F. Bailey, age 77, lifelong Amesbury resident, died peacefully and went home to be with the Lord, Fri. morning, Dec. 6, 2019, at the Kaplan Family Hospice House in Danvers, with his loving family by his side.

Born in Amesbury, Sept. 7, 1942, he was the son of the late Francis A. and Ruth A. (Tilton) Bailey and was a graduate of Amesbury High School. Shortly thereafter, he entered the military, serving with the U.S. Army from Sept. 8, 1961, until his honorable discharge on Sept. 4, 1964, with the rank of SP 5.
After his military service, he continued his education, receiving a bachelor's degree in Engineering from Fitchburg State University. He was retired from Raytheon, where he had worked as an electrical engineer for 42 years.

He was an avid candlepin bowler, loved playing the card game 45s and greatly enjoyed gathering with his church family. He loved watching the Red Sox and the Patriots games on TV as well as many college football games.

He leaves behind his beloved wife of 23 years, who has also been his best friend and greatest supporter for 29 years; his children, Lisa Bailey of Hampton, N.H., Aimee Alexuk, and husband Michael of Londonderry, N.H., Angela Vargas and husband Keith of Peabody, Mass., Kathryn Bailey Charron and husband Dana of Malden, Mass., Scott Dow and wife Catreen of Seabrook, N.H., Brian Dow and wife Ashley of Stratham, N.H., and Bethany Bailey of Amesbury; Mass.; 11 grandchildren; and eight great-grandchildren; his siblings, Sandra Sadowski and husband Bob of Newburyport, Mass.; Bernard Bailey of Hampton, N.H., David Bailey of Hampton, N.H., and Bonita Harrington of Exeter, N.H., along with numerous nieces and nephews, extended family and countless dear friends. In addition to his parents, he was predeceased by a daughter, Ronalee Sheehan; a son, Frederick Bailey; and two granddaughters, Julie Ramey and Kristina Sheehan.

Plant a tree in memory
of Richard

Jerry Sarno
Worked with Dick for many years at Raytheon. He was a respected engineer, coworker and friend. He spoke often of his love of family and God. RIP Dick, and condolences to his family.
Jerry Joaquim
I worked with Dick for years at Raytheon on the Hawk System. He taught me many things including technical expertise and financial savvy. However it was his longtime friendship that I treasured the most.
Kathy Messina
So sorry to hear about Dick. I worked with him at Raytheon. He was a nice man. RIP Dick
View all