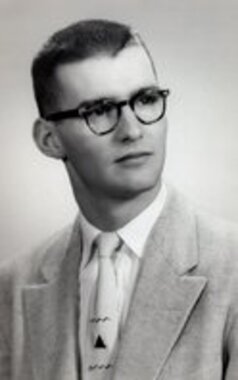 Back to Richard's story

Hampstead, NH - Richard F. (Dick) Prendible, 82, passed away on January 17, 2020, after a long illness.
Born on June 27, 1937, Dick was the son of Richard J. and Dorothy (Bouchard) Prendible, and younger brother to Paula (Prendible) LeBlanc, and was raised in Peabody, Mass. Following his graduation from Merrimack College in 1959, he married the late Alice Lorraine (Belle) Prendible. They resided in Middleton, Mass., Georgetown, Mass., Merrimac, Mass., and most recently in Hampstead, N.H. Dick retired from his position as Planner at Honeywell in Acton, Mass., in 2000, after 26 years of loyal service.
Dick is survived by his family, including his daughter, Dianne Prendible of Merrimac; daughter and son-in-law Denise and Michael Bortone of Hampstead; granddaughter Kara of Rochester, Minn.; and grandson Nicholas, also of Hampstead; son and daughter-in-law Jim and Kim Prendible of Bedford, N.H.; and grandsons, Ryan and Adam; and grandson and granddaughter-in-law, Derek and Jen Boyd; and great-granddaughter Ava, of Wilmington, Mass.
In addition to his sister Paula LeBlanc of Peabody, Dick will be greatly missed by his sister-in-law Joanne Hilbert of Punta Gorda, Fla.; his brother-in-law and sister-in law, Oscar and Joan Belle of Sarasota, Fla.; as well as many nieces and nephews and their families.
Dick was a lifelong fan of the Boston Red Sox, Boston Bruins, Boston Celtics, and New England Patriots, but he was never happier than when he was attending one of countless high school and college-level football, baseball and basketball games in support of his son, Jim, and grandsons Derek and Nick. Dick started playing cards when he was a boy, a pastime he enjoyed his entire life, even playing several cribbage tournaments with his daughters during his final year. Dick grew up listening to the Big Band and Swing music of the orchestras of The Dorsey Brothers, Benny Goodman, and Harry James, and enjoyed many singers of that era, especially Frank Sinatra, Helen Forrest, and Rosemary Clooney.

Visitation with the family will take place on Saturday, January 25, from 1 to 4 p.m., at the Conte-Giamberardino Funeral Home, 14 Pleasant Street, Georgetown, to be followed by a brief memorial service. For directions, or to send condolence messages to Dick's family, please visit www.cgfuneralhomegeorgetown.com.
For those interested in an alternative to flowers, the family suggests memorial contributions may be made to the American Lung Association at www.lung.org.
Published on January 21, 2020
To plant a tree in memory of Richard F. Prendible, please visit Tribute Store.

Plant a tree in memory
of Richard

A place to share condolences and memories.
The guestbook expires on April 19, 2020.

Richard Botteron
Dick was one of the most gracious persons I was fortunate to transport as a volunteer for Caregivers of Derry. Loved swapping stories about each other's grandchildren and great-grandchildren, he was always positive and yes, very blessed. His grand- and great-grands were his joy and loves.
View all